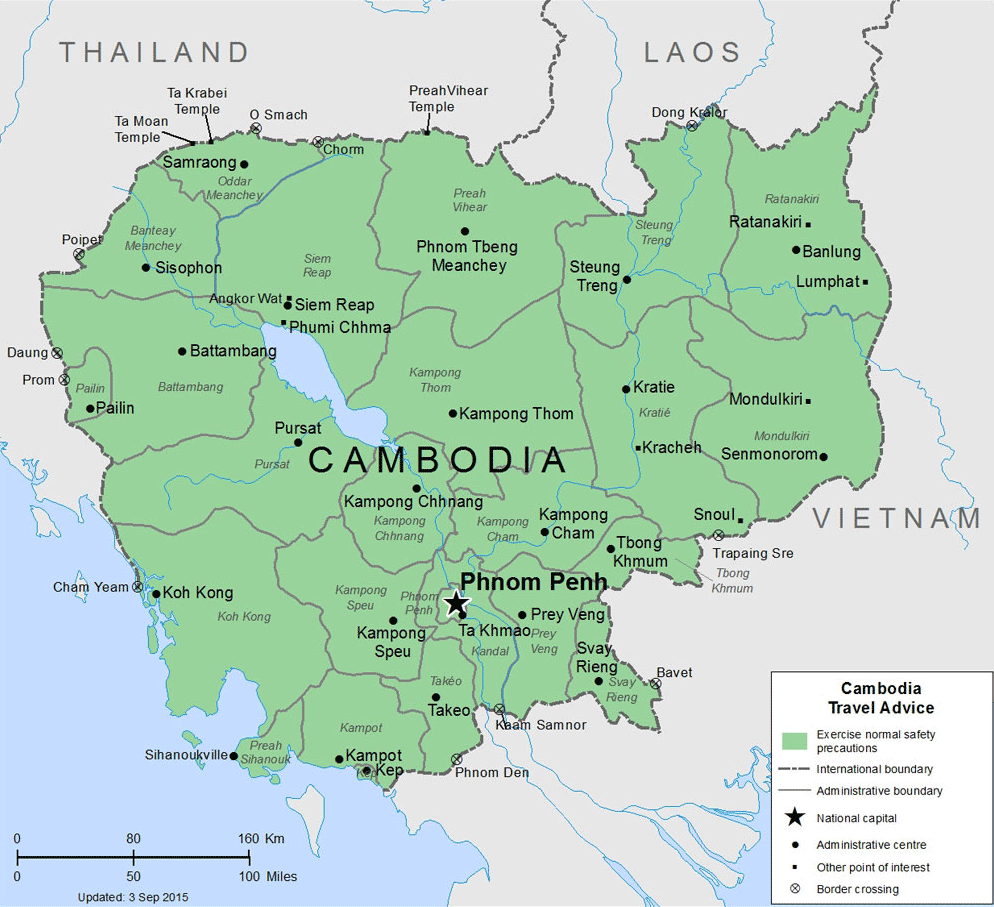 The Kingdom of Cambodia, formerly Kampuchea, is a Southeast Asian nation that borders Thailand, Laos, Vietnam, and the Gulf of Thailand.
The capital city is Phnom Penh.

Cambodia’s terrain consists mainly of low plains, with mountains to the southwest and north.

Two dominant physical features of Cambodia are the Mekong river, which runs from north to south of the country, and the Tonlé Sap Lake. 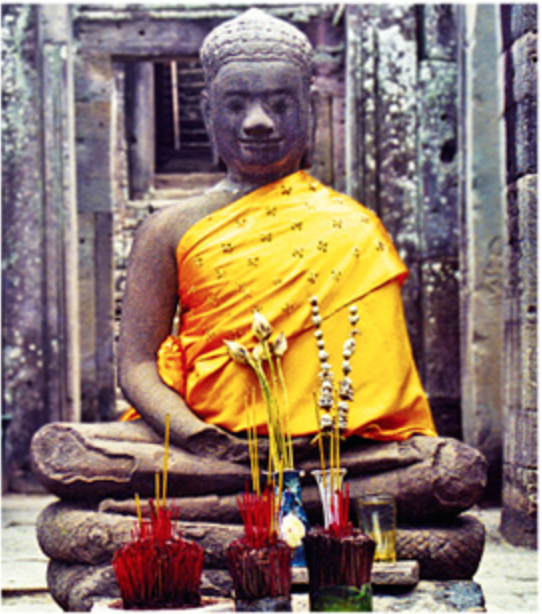 Theravada Buddhism is the prevailing official religion in Cambodia and approximately ninety percent of the population is Buddhist. Islam, Hinduism and Christianity are also embraced in Cambodia.

In Cambodia, regardless of religion, the country maintains a harmonised state. 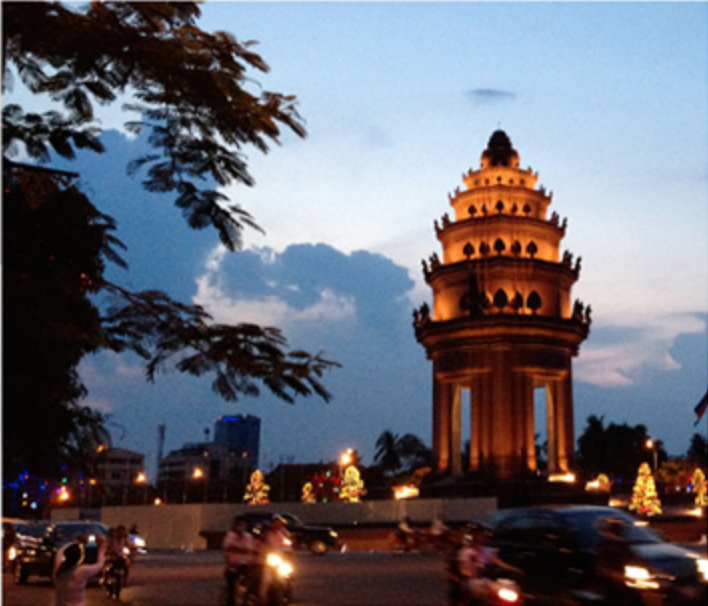 The Kingdom of Cambodia has a great wealth of traditional and cultural festivals dated according to the Cambodian lunar calendar. All of these festivals are influenced by the concepts of Buddhism, Hinduism, and royal cultures. Most of these are great rejoicings of the urban and rural populace, held annually as follows.

The Khmer New Year Day, called “Bon Chol Chhnam Thmei Khmer” in the Khmer language, is celebrated on 13 April in keeping with the Cambodian lunar calendar. The New Year holidays last for three days. This festival marks the end of the harvest season when Cambodian farmers enjoy the fruits of their labor and relax before the start of the rainy season.
Wednesday, April 14, 2021
Thursday, April 15, 2021
Friday, April 16, 2021 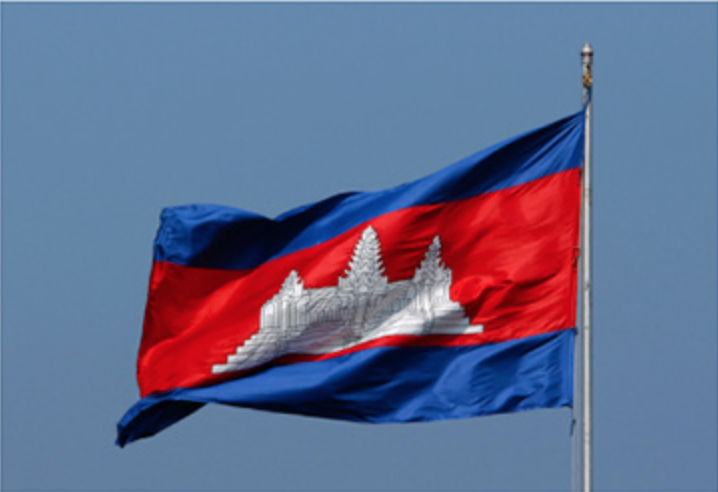 The flag of Cambodia symbolizes the country’s slogan: Nation, Religion, King. The two large blue stripes represent royalty and the center red stripe represents the nation. The image of the white temple stands for the nation’s religion.

The race that produced the builders of Angkor developed slowly through the fusion of the Mon-Khmer racial groups of Southern Indochina during the first six centuries of the Christian era. Under Indian influence, two principal centers of civilization developed. The older, in the extreme south of the peninsula was called “Funan” (the name is a Chinese transliteration of the ancient Khmer form of the word “Phnom”, which means “hill”). Funan was a powerful maritime empire that ruled over all the shores of the Gulf of Siam. In the mid-sixth century, the Kambuja who lived in the middle Mekong (north of present day Cambodia), broke away from Funan. Within a short period, this new power known as Chenla, absorbed the Funanese Kingdom. In the late seventh century, Chenla broke into two parts: Land Chenla (to the north) and Water Chenla (to the south along the Gulf of Thailand) dominated by the Chinese. Land Chenla was fairly stable during the 8th century, whereas Water Chenla was beset by dynastic rivalries. During this period, Java invaded and took control part of the country. 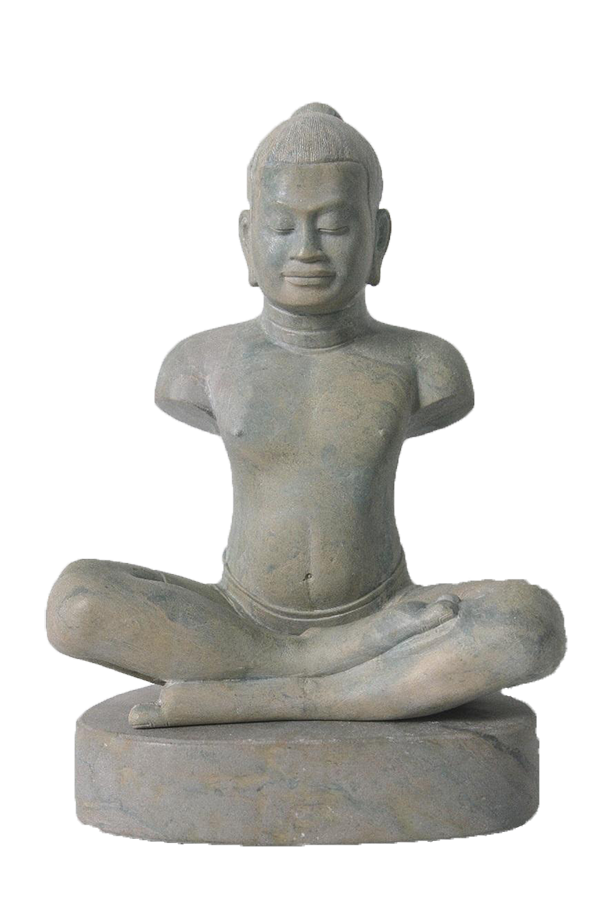 At the beginning of the ninth century, the kings set up their respective capital in the present province of Siem Reap. For nearly six centuries, the kings enriched it by building temples one after another and each being more sumptuous than the other. Two hundred of these temples are spread all over in the Angkorian area some 400 square kilometers in the Siem Reap Province. The temples and their sanctuaries are best known for their architecture and sculptures.

The first founder of Angkor was King Jayayarman II (802-850), who built one of his residences on the plateau of the Kulen in 802. King Indravarman I (887-889), a nephew of King Jayavarman II, constructed a vast irrigation system at Lolei and then built the tower of Preah Ko in 879 and Bakong in 881. King Yasovarman (889-900), the son of King Indravarman I, dedicated the towers of Lolei to his memory in 893 and founded a new capital to the northwest which was to remain the very heart of Angkor. He built the Eastern Baray, a 7km X 2km size artificial lake also.

King Harshavarman I (900-923), the son of King Yasovarman, who took to the foot of Phnom Bakheng, consecrated the little temple of Baksei Chamkrong, and built Prasat Kravan in 921. King Jayavarman IV (928-941), uncle of King Harshavarman I, reigned in northeastern Cambodia near the present town of Koh Ker. He erected several majestic monuments. King Rajendravarman (944-968) returned to Angkor in 952 and built the Eastern Mebon and Prè Roup in 961. In 967, the Brahman Yajnavaraha, a high religious dignitary of royal blood, erected the temple of Banteay Srei, about 20 km northeast of the capital. King Jayavarman V (968-1001) founded a new capital around Takeo Temple.

In the eleventh century, King Suryavarman I (1002-1050) seized Angkor and founded a glorious dynasty. It was at this time that the Gopura of the Royal Palace of Angkor Thom was completed with the sober pyramid of the Phimeanakas at its center. He also erected the temple of Phnom Chiso, some parts of Preah Vihear, and Preah Khan in Kampong Svay District.

King Udayadityavarman II (1050-1066), son of king Suryavarman I, built the mountain temple of Baphuon and Western Baray. King Udayadityavarman’s brother, King Harshavarman III, succeeded him and ruled from 1066 to 1080 when violent strife led to the fall of the dynasty. King Jayavarman VI (1080-1113) continued to build Preah Vihear Mount in Vat Po and Phimai.

King Suryavarman II (1113-1150) extended his power from the coast of the China Sea to the Indian Ocean and built the temples of Angkor Wat, Thommanon, Chau Say Tevoda, Preah Palilay, Preah Pithu and Banteay Samrè. After these dazzling achievements, the Khmer civilization began to decline due to internal strife and an attack by the Chams.

King Jayavarman VII (1181-1220) was the most fascinating personality in Khmer history. He re-established his rule over all of southern Indochina and is best known for his huge building program. He built Ta Prohm (1186) and Preah Khan (1191) as a dedication to his parents.Then he erected Banteay Kdei, Srah Srang, the Terrace of the Leper King, the Terrace of the Elephants, Neak Pean, Ta Saom, Ta Nei, and a few monuments in other parts of the country.t was he who founded his great capital, Angkor Thom and in the center of which, he built the Bayon temple with its two hundred stone faces.

It is understandable that the country was exhausted after these enormous efforts. The decline of the Angkor era began after the death of King Jayavarman VII in the early thirteenth century. Due to Siamese invasion and the limitations of the irrigation system, Khmer power declined so drastically that the king was finally obliged to move to the vicinity of Phnom Penh in 1431. Then, resulting from a series of Siamese and Cham invasions, the country was placed as a French protectorate in 1863.

After regaining Independence in 1953, the country resumed several names: 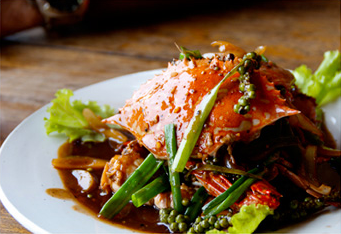 Cambodian cuisine includes noodles, soups, grills, stir-fried, curries, salads, desserts, lots of vegetables, tropical fruits, and of course rice which is the staple food for Cambodians. Cambodian culinary secrets are rarely written down; the recipes were instead handed down from mother to daughter. From an ancient origin has come a traditional cuisine of unsuspected treasures: a unique blend of flavors and colors that enhance the natural ingredients used.

Cambodians perfected the art of blending spice paste using many ingredients like cloves, cinnamon, star anise, nutmeg, cardamom, ginger and turmeric. They add other native ingredients like galangal, garlic, shallots, lemongrass, cilantro, and kaffir lime leaves to these spices to make a rather distinctive and complex spice blend known as “kroeung”.

Although noodles are also popular, almost every meal includes a bowl of rice. A wide range of curries, soups and stir fried are usually served with rice. Being in a country that produces many rice varieties, tourists can enjoy the best aromatic grains and various types of glutinous rice. The latter is more commonly served with a salad or in desserts with fruits.

There are two other unique ingredients that give Cambodian cuisines their fabulous typical flavour. One is a pungent fermented fish paste known as pra-hok and the other, the kapi, a fermented prawn paste. These require an acquired taste for most but they are beloved by some who used them in many dishes or even taken as a dipping sauce. Collectively, these ingredients have become an important aromatic combination commonly used in Cambodian cuisines.

Typically, a Cambodian meal is served with rice and at least three other dishes. It usually includes a soup (samlor), served alongside the main dishes. Each of the individual dishes will either be sweet, sour, salty or bitter; these exist side by side in harmony, sometimes even within a single dish, to offer an original melody. Chili is usually left up to the individual to add. In this way tourists are subtly ensured that they get a bit of every flavour to satisfy their palates. 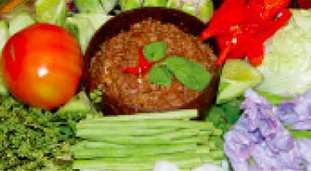 Prahok Kties is a delicious staple dish of Cambodian cuisine. Prahok, which means fermented fish, is GOLD to Cambodian cuisine, and can take up different shapes of flavor, depending on the recipe. Prahok Kties is fried with pork taken from the belly sides of the hog, which accentuates the flavor, particularly with the amazing quality of pork (sakchru) that Cambodia produces. It leaves you with an amazing taste in your palates. 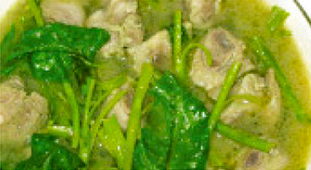 Machu Kroung (soup), a healthy, fulfilling, flavorful sweet and sour soup that is incredibly wholesome. The fried peanuts accentuate the soup. The lemongrass (slak krai) and the saffron truly complement each other and to top it off, the decorative local grown chili flakes (matey) make this quite an appealing site to the eye. This is in fact more towards a curry than it is the soup that most foreigners thought it to be. 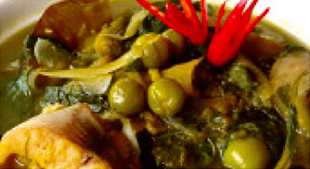 Korko, the hearty traditional gravy is truly quite delightful; its base ingredient is actually toasted rice pounded and turned into a tasty base and complimented by prahok, pork and pumpkin, which together add a delicious warmth and texture to the palate. Korko, is one of those great fusions of traditional ingredients cooked to perfection. 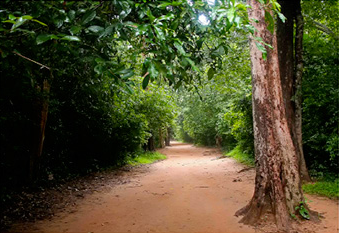 DOs and DON’Ts in Cambodia

People in Cambodia are well-known for their hospitality and warmth. Out of respect, visitors

to the Kingdom should take care to observe local customs and practices. You may find it useful to

familiarize yourself with the following common dos and don’ts before embarking on your trip to Cambodia.

> Ask for permission before taking photographs of any Cambodian people or monks.

> It is customary to remove your shoes when entering a place of worship such as a pagoda or temple. Additionally, visitors should dress appropriately when inside a religious site (upper arms and legs should be covered, hats removed).

> It is respectful to remove your shoes when entering someone’s home.

> Though not always expected, a respectful way of greeting another individual is to bow the head slightly with hands pressed together at the chest (known as “Sampeah”).

> If invited to dine in a Cambodian family’s home, it is polite to bring a small gift for the host such as fruit, dessert, or flowers.

> If invited to attend a Cambodian wedding, it is customary to bring cash as a wedding gift.

> When using a toothpick at the table, use one hand to cover your mouth.

> Don’t use your feet to point at someone.

> Don’t touch a Cambodian person on the head.

> Don’t begin eating if you are a guest at a dinner and the host has yet to take a bite.

> Women should never touch male monks or hand something directly to them.

> Keep public displays of affection to a respectful minimum.

Do not litter; keep our community clean and safe

Plastic bags can be hazardous; dispose them properly