ASEAN Ambassadors joint a courtesy called on His Excellency KHALED SULAIMAN AL-JARALLAH, Deputy Minister of Foreign Affairs of the State of Kuwait

On 08 August 2017, ASEAN Committee in Kuwait (ACK) Ambassadors joint a courtesy called on His Excellency KHALED SULAIMAN AL-JARALLAH, Deputy Minister of Foreign Affairs of the State of Kuwait, at Ministry of Foreign Affairs of Kuwait. His Excellency KHALED SULAIMAN AL-JARALLAH expressed appreciation of the successful of the 50th ASEAN Foreign Ministers’ Meeting and Related Meetings in the Philippines recently and also pointed out the ASEAN efforts exerted by its member states for strengthening peace and stability in the region. He also viewed the situation in Korean peninsula, especially the dangerous activities of North Korea which was concern by International community. Moreover, he also said that the situation in the GCC, which was currently sick, but he believed that it will be settled and have more cooperation and stronger than before.

In turn, the current chair the Filipino Ambassador told his Excellency Deputy Foreign Minister in brief the efforts made by ASEAN member states to forge ahead together which set out the future direction for politically and economically integrated, ASEAN Economic Community in 2015 and the 3 pillars of ASEAN. He also formally invited him as honor guest of the ACK’s ASEAN Night to be held on 27th September 2017 to celebrate the 50th ASEAN establishment. 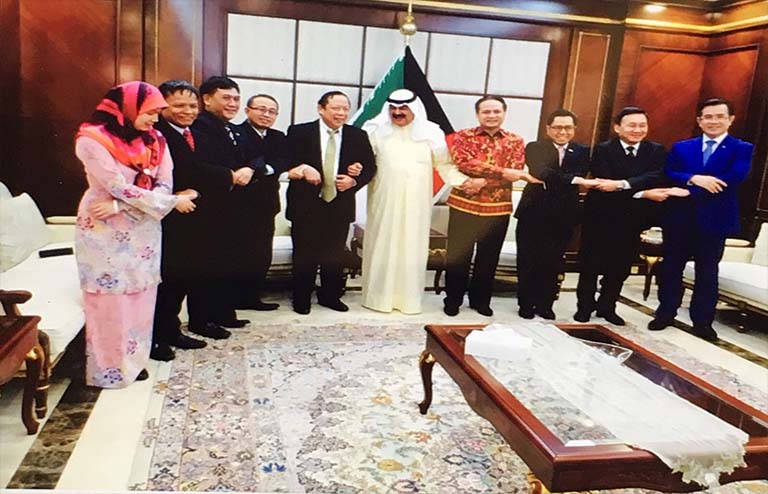