H.E. Nom Piseth, Head of Mission of Cambodia to EU, had a mission in Vienna, Austria

On 16-19 September 2019, H.E.​ NOM Piseth, Ambassador of the Kingdom of Cambodia to Belgium, Austria, Netherlands and Luxembourg and Head of Mission of the Kingdom of Cambodia to the European Union, was on a mission in Vienna, the Republic of Austria. On that occasion, His Excellency Ambassador presented letters of credence to His Excellency Mr. Alexander Van der Bellen, Federal President of the Republic of Austria and had separate meetings with His Excellency Mr. Alexander MARSCHIK, Director General for Bilateral Affairs, His Excellency Mr. Andreas RIECKEN, Director General for EU and Multilateral Affairs of the Federal Ministry for Europe, Integration and Foreign Affairs of Austria, and Mr. Christoph RAMOSER, Director of International University Relations of the Federal Ministry of Education, in order to deepen and broaden the existing bilateral cooperation between Cambodia and Austria. 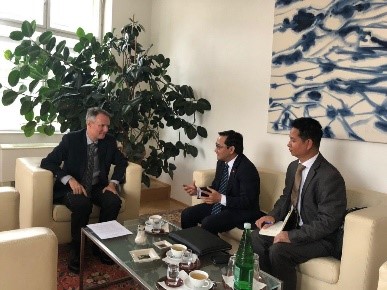 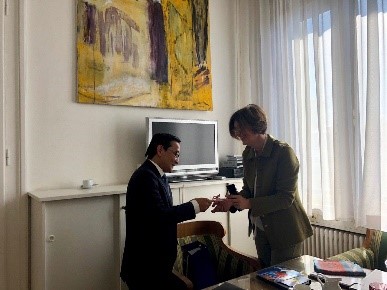