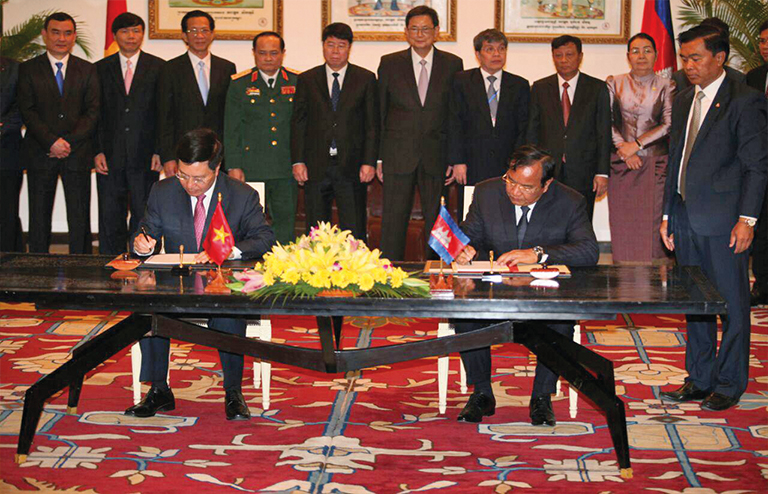 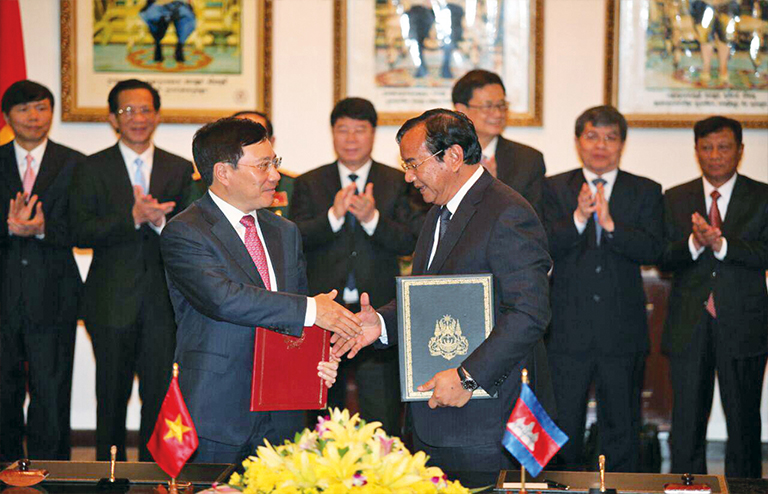 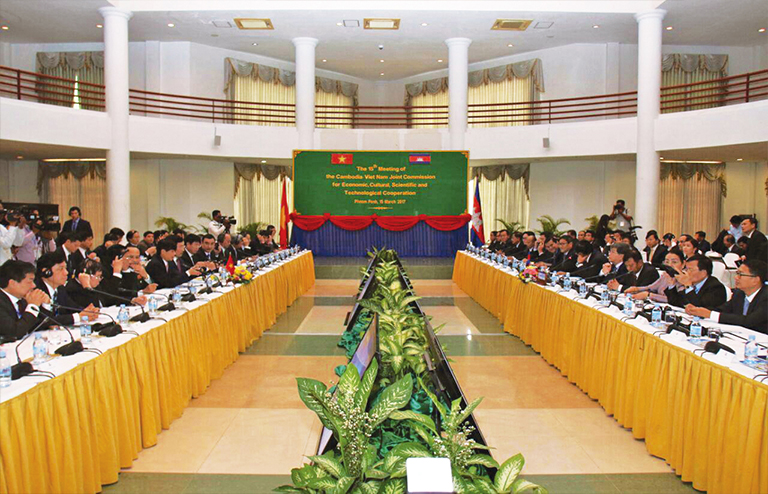 At the invitation of H.E. Mr. Prak Sokhonn, Senior Minister, Minister of Foreign Affairs and International Cooperation of the Kingdom of Cambodia, H.E. Mr. Pham Binh Minh, Deputy Prime Minister, Minister of Foreign Affairs of the Socialist Republic of Viet Nam, led a delegation to attend the 15th Meeting of the Cambodia-Viet Nam Joint Commission (15th JC) on Economic, Cultural, Scientific and Technological Cooperation, held on 13-15 March 2017 in Phnom Penh, Kingdom of Cambodia.

At the 15th JC, both sides reiterated their respective countries’ positions to further deepen the bond of friendship and strengthen the existing mechanisms of cooperative activities which both countries have been undertaking for the mutual benefits of the two countries. Both sides took the opportunities to highlight positive outcomes of the visits of important dignitaries of both countries, namely official visit to Viet Nam by Samdech Akka Moha Sena Padei Techo Hun Sen, Prime Minister of the Kingdom of Cambodia on 20-21 December 2016, whereas the visits to Cambodia were also made by H.E. Mr. Tran Dai Quang, President of the Socialist Republic of Viet Nam and H.E. Mrs. Nguyen Thi Kim Ngan, Chairwoman of the National Assembly of the Socialist Republic of Viet Nam, on 14-16 June and 27-28 September 2016, respectively.

The Meeting was satisfied with positive outcomes on many fields of cooperation such as education and training, agriculture, forestry and fisheries, environment, mines and energy, trade and investment, tourism, finance and banking, social welfare and anti-crime cooperation etc.

On education and training, Cambodia agreed to grant a number of scholarships to Vietnamese students in undergraduate, graduate and Khmer language study programs. Viet Nam agreed to provide 1116 scholarships (for long-term and short-term) to Cambodian students for various subjects. Furthermore, both sides agreed to increase monthly allowances for scholarship students studying in each country for better living condition.

On agriculture, forestry and fisheries, both sides agreed to continue strengthening cooperation in preventing, combatting and suppressing the cross border illegal trade of timber, wild animals and natural rubber products by way of regular exchanges of information between

On energy cooperation, the Vietnamese side pledged to ensure that the trade of electricity for the purpose of electricity consumption would be in line with the capacity of and the agreement between the two sides. The Vietnamese side would consider increasing its electricity supply to Cambodia at the request of the Cambodian side in accordance with the real conditions of the Vietnamese side. Both sides agreed to coordinate closely in taking technical measures and making investment to ensure safe, reliable and steady operation of grid interconnections between the two countries, especially the Chau Doc-Takeo 220 KV interconnection line​. Both sides would encourage and facilitate the research and use of technical measures in electricity supply of approximately 100 MW during rainy season from Cambodia to Viet Nam in a manner that ensures safe, steady and reliable operation and supply of electricity for the two countries’ electricity systems.

On trade and investment, both sides highly valued the coordination efforts to promote investments in each other’s country and also agreed to strengthen cooperation in promoting regional and world economic integration. The Meeting tasked the Ministry of Commerce of Cambodia and the Ministry of Industry and Trade of Viet Nam to:

(1)     Strengthen coordination in preventing cross-border smuggling and trade fraud, including the production and trafficking of fake and low-quality goods;

(2)    Agreed to resolve the differences so as to soon conclude the negotiations and sign the Agreement on Border Trade between Viet Nam and Cambodia, which will replace the “Agreement on Trade and Exchange of Goods and Services in Border Areas between Cambodia and Viet Nam” in 2017.

(3)     Finalize the “Study for formulating the Master Plan for Cambodia-Viet Nam Border Trade Development until 2025 with a vision to 2035” and develop regulations on the management of border markets between the two countries.

On transportation, both two sides agreed to:

On narcotics and drug control, both sides agreed to reinforce information sharing and joint operation in border areas. The respective drug control authorities and law enforcement officers operating at the borders shall continue to work with the relevant competent authorities to improve cooperation and effectiveness with regard to drug investigations and arrests.

On border issues, the two sides reaffirmed the respect for and full implementation of border delimitation treaties and relevant border agreements signed between the two countries. The two sides took note of recent achievements in border demarcation and marker planting, and expressed their high appreciation for the efforts of the Joint Commission on Demarcation and Abornment for Land Boundary (JBC) for achieving approximately 84% of the land border demarcation and marker planting based on the border delimitation treaties between the two countries. Both sides agreed to instruct their respective border provincial authorities to maintain close collaboration with the JBC in the construction of border pillars and supplementary border markers, and in raising the awareness of people living in border areas on the importance of border demarcation and protection of border pillars.

They expressed their desire to hold talks on maritime boundary delimitation between the two countries at the earliest possible time following the completion of the Cambodia – Viet Nam land border demarcation.

Besides, both sides agreed to speed up implementation of other relevant matters or projects which has been delayed while exploring new and concrete measures to further improve activities and cooperation with the ultimate aim to achieve maximum outcomes for serving the mutual interests of the two peoples.

At the conclusion of the 15th JC, H.E. Mr. Prak Sokhonn and H.E. Mr. Pham Binh Minh signed agreed minutes on the outcomes of the meeting.